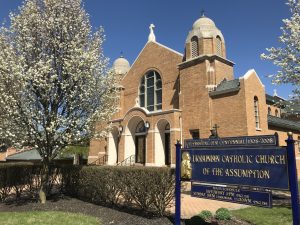 WELCOME
Our parish family of Assumption of the Blessed Virgin Mary Ukrainian Catholic Church is very honored and pleased to welcome you to our school and the parish, an Eastern Catholic faith community of prayer and fellowship.

We are Catholics in union with the Pope, the Bishop of Rome, and a successor of the apostle Peter. By virtue of our communion with the Church of Rome, we are a Catholic Church who shares the same faith, beliefs and sacraments with other sister Churches. However, each Church has its own way of expressing the Faith through the Liturgy and ceremonies based on unique customs and traditions.

Jesus Christ founded His Church through the Apostles. By the grace received from God at Pentecost, the Apostles established faith communities or churches throughout the ancient world. St. Paul founded the church of Antioch; St. Peter and St. James, the church of Jerusalem; St. Andrew, the church of Constantinople; St. Mark, the Church of Alexandria; St. Peter and St. Paul, the Church of Rome. As they preached the Gospel in different parts of the world, they adapted the ceremony of the Liturgy to the customs and music of the local people.

As a result, four great centers of Christianity emerged with their distinctive liturgical customs, but rooted and expressing the same Faith. These centers were located in the cities of Jerusalem, Antioch, Rome and Alexandria. In the beginning of the fourth century when the capital of the Roman Empire was moved to the city of Byzantium and renamed Constantinople, an adaptation of the Antiochean tradition of celebrating the Liturgy was made. A new center emerged in Constantinople, from where the Christian faith spread via Bulgaria among the Slavic people. Later, in the 16th and 17th centuries, some Eastern Churches including the Church of Ukraine reestablished their communion with the Church of Rome, yet continue to celebrate a distinct Liturgy and follow own spirituality, theology and discipline.

THE HOLY EUCHARIST
The Holy Eucharist (also known as Holy Communion) is the rite that Christians perform in fulfillment of the instruction that Jesus gave to do in his memory. The Holy Eucharist is consecrated at every Divine Liturgy, and the faithful partake of the newly-consecrated Gifts. We believe that when the bread and wine are consecrated in the Eucharist, they cease to be bread and wine, and become instead the body and blood of Christ: although the empirical appearances are not changed, the reality is changed by the power of the Holy Spirit.

BYZANTINE SIGN OF THE CROSS
Blessing oneself with two fingers brought to the thumb represents the Trinity. The last two fingers held to the palm represent the two natures of Jesus–God and man. For the first 1,200 years of the Church, in making the Sign of the Cross, the hand was typically brought from the right to the left shoulder. In the East this is still the practice, to signify Christ enthroned at the right hand of the Father.

INCENSE
We use incense as a sign of reverence for the sacred place and the sacredness of the people who are made in Gods image and as a sign of preparing for something important about to happen in the Liturgy. It is our prayer ascending like the smoke of incense before the throne of God.

BOWS AND BLESSINGS
We bow and make the Sign of the Cross many times during the Liturgy, as a sign of our faith, and the receiving and accepting of Gods blessings. Following the making of the Sign of the Cross, reverence to God is further expressed by bowing the head. We bless ourselves every time we mention the Persons of the Trinity by name, or whenever the priest blesses the congregation. We also bow and sign ourselves whenever we enter or leave the church.

ICONS
Icons have been an integral part of our faith since the beginning of Christianity. More than just paintings, they have a deep spiritual significance. Referred to as “Windows into Heaven,” they provide a focal point for prayer, helping us be more in-tune with God and saints. We do not worship icons, of course; worship is for God alone. But we do venerate them, believing that the honor given to the icon passes on to the person it images.